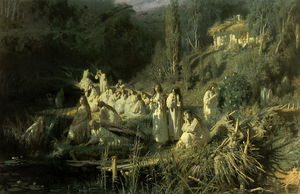 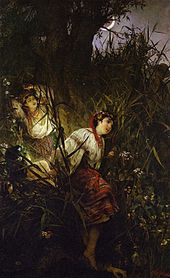 Rusalka or Pusalka is a water nymph, [1] a female spirit in Slavic mythology. She is the equivalent of a mermaid. She has different names in various cultures: rusalka (in East Slavic cultures) vila (Czech, Slovak), wiła (Polish).

According to most traditions, rusalki were fish-women, who lived at the bottom of rivers. In the middle of the night, they would walk out to the bank and dance in meadows. If they saw handsome men, they would fascinate them with songs and dancing, mesmerize them, then lead them away to the river floor to their death.

In most versions, the rusalka is an unquiet being who is no longer alive, associated with the unclean spirit and dangerous. According to Zelenin,[2] people who die violently and before their time, such as young women who commit suicide because they have been jilted by their lovers, or unmarried women who are pregnant, must live out their designated time on earth as a spirit. In Slavic lore especially, rusalka are "the spirits of girls who died 'before their time' and returned to live as spirit being in our world, near where they had once lived and died".[3]

The ghostly version is the soul of a young woman who had died in or near a river or a lake and came back to haunt that waterway. This undead rusalka is not invariably malevolent, and will be allowed to die in peace if her death is avenged.

Rusalki can also come from unbaptized children, often those who were born out of wedlock and drowned by their mothers for that reason. Baby rusalki supposedly wander the forest begging to be baptised so that they can have peace. They are not necessarily innocent, however, and can attack a human foolish enough to approach them.

Rusalki in folklore can also be beneficial. As spirits of young girls who died early, they were sometimes believed to confer their unused fertility on fields, helping crops to grow.[3]

While her primary dwelling place was the body of water in which she died, the rusalka could come out of the water at night, climb a tree, and sit there singing songs, sit on a dock and comb her hair, or join other rusalki in circle dances in the field.

Rusalki were believed to often exist in groups:

[V]ilas generally live in little groups in the wild, particularly around water, where they love to swim, dive, splash, and play together in lakes, pools, rivers, and millraces. Unmarried girls from a particular neighborhood, while alive, went around in little bands, socializing together at working bees and singing and dancing together at important festivals. The vilas, also mostly young girls, were assumed to do likewise.[3]

Though in some versions of the myth, their eyes shine like green fire, others describe them with extremely pale and translucent skin, and without visible pupils. The rusalka's hair is sometimes depicted as green or golden, and often perpetually wet. The rusalka could not live long on dry land, but with her comb she was always safe, for it gave her the power to conjure water when she needed it. According to some legends, should the rusalka's hair dry out, she would die.

Rusalki like to have men and children join in their games. They can do so by enticing men with their singing and then drowning them, while the children were often lured with baskets of fruit sprinkled with nectar. Men seduced by a rusalka could die in her arms, and in some versions hearing her laugh could also cause death. Alternatively, they would attract men, mainly bachelors, and tickle them to death.[4]

Specifics pertaining to rusalki differed between regions. Although in most tales they lived without men, in Ukraine they were often linked with water, while in Belarus they were linked with the forest and field. Where land was fertile, the maidens appeared naked and beautiful. In harsher areas of Russia, they appeared as "large breasted amazons".[5] Often, in the north, they were ugly and covered in hair.

The rusalki were believed to be at their most dangerous during the Rusalka Week (Rusalnaya) in early June. At this time, they were supposed to have left their watery depths in order to swing on branches of birch and willow trees by night. Swimming during this week was strictly forbidden, lest mermaids would drag a swimmer down to the river floor. A common feature of the celebration of Rusalnaya was the ritual banishment or burial of the rusalka at the end of the week, which remained as entertainment in Russia, Belarus and Ukraine until the 1930s.[6]