Melusine's secret discovered, from Le Roman de Mélusine. One of sixteen paintings by Guillebert de Mets circa 1410. The original is held by the Bibliothèque nationale de France.

Melusine (or Melusina) is a figure of European legends and folklore, a feminine spirit of fresh waters in sacred springs and rivers.

She is usually depicted as a woman who is a serpent or fish from the waist down (much like a mermaid). She is also sometimes illustrated with wings, two tails or both, and sometimes referred to as a nixie.

Melusine is sometimes used as a heraldic figure, typically in German Coats of arms, where she supports one scaly tail in each arm. She may appear crowned. The Coat of Arms of Warsaw features a siren (identified in Polish as a syrenka) very much like a depiction of Melusine, brandishing a sword and shield. She is the water-spirit from the Vistula who identified the proper site for the city to Boreslaus of Masovia in the late 13th century. 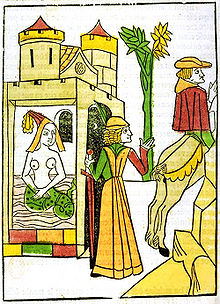 Raymond walks in on his wife, Melusine, in her bath and discovers she has the lower body of a serpent. Illustration from the Jean d'Arras work, Le livre de Mélusine (The Book of Melusine), 1478.

The most famous literary version of Melusine tales, that of Jean d'Arras, compiled about 1382–1394 was worked into a collection of "spinning yarns" as told by ladies at their spinning. Coudrette (Couldrette) wrote "The Romans of Partenay or of Lusignen: Otherwise known as the Tale of Melusine," giving source and historical notes, dates and background of the story. He goes in to detail and depth about the relationship of Melusine and Raymondin, their initial meeting and the complete story."

The tale was translated into German in 1456 by Thüring von Ringoltingen, the version of which became popular as a chapbook. It was later translated into English c. 1500, and often printed in both the 15th century and the 16th century. There is also a prose version called the Chronique de la princesse.

It tells how Elynas, the King of Albany (an old name for Scotland) went hunting one day and came across a beautiful lady in the forest. She was Pressyne, mother of Melusine. He persuaded her to marry him but she agreed, only on the promise — for there is often a hard and fatal condition attached to any pairing of fay and mortal — that he must not enter her chamber when she birthed or bathed her children. She gave birth to triplets. When he violated this taboo, Pressyne left the kingdom, together with her three daughters, and traveled to the lost Isle of Avalon.

The three girls — Melusine, Melior, and Palatyne — grew up in Avalon. On their fifteenth birthday, Melusine, the eldest, asked why they had been taken to Avalon. Upon hearing of their father's broken promise, Melusine sought revenge. She and her sisters captured Elynas and locked him, with his riches, in a mountain. Pressyne became enraged when she learned what the girls had done, and punished them for their disrespect to their father. Melusine was condemned to take the form of a serpent from the waist down every Saturday. In other stories, she takes on the form of a mermaid.

Raymond of Poitou came across Melusine in a forest in France, and proposed marriage. Just as her mother had done, she laid a condition, that he must never enter her chamber on a Saturday. He broke the promise and saw her in the form of a part-woman part-serpent. She forgave him. Only when, during a disagreement with her, he called her a "serpent" in front of his court, did she assume the form of a dragon, provided him with two magic rings and flew off, never to return.[1]

In "The Wandering Unicorn" by Manuel Mujica Láinez, Melusine tells her tale of several centuries of existence from her original curse to the time of the crusades.[2]

Melusine legends are especially connected with the northern, most Celtic areas of Gaul, and the Low Countries. Sir Walter Scott told a Melusine tale in The Minstrelsy of the Scottish Border (1802–1803) confident that

the reader will find the fairy of Normandy, or Bretagne, adorned with all the splendour of Eastern description. The fairy Melusina, also, who married Guy de Lusignan, Count of Poitou, under condition that he should never attempt to intrude upon her privacy, was of this latter class. She bore the count many children, and erected for him a magnificent castle by her magical art. Their harmony was uninterrupted until the prying husband broke the conditions of their union, by concealing himself to behold his wife make use of her enchanted bath. Hardly had Melusina discovered the indiscreet intruder, than, transforming herself into a dragon, she departed with a loud yell of lamentation, and was never again visible to mortal eyes ; although, even in the days of Brantome, she was supposed to be the protectress of her descendants, and was heard wailing as she sailed upon the blast round the turrets of the castle of Lusignan the night before it was demolished.

When Count Siegfried of the Ardennes bought the feudal rights to Luxembourg in 963, his name became connected with the local version of Melusine. In 1997 Luxembourg issued a postage stamp commemorating this Melusina, with essentially the same magic gifts as the ancestress of the Lusignans. This Melusina magically made the castle of Bock appear the morning after their wedding. On her terms of marriage, she too required one day of absolute privacy each week. Alas, Sigefroid, as the Luxembourgeois call him, "could not resist temptation, and on one of the forbidden days he spied on her in her bath and discovered her to be a mermaid. When he let out a surprised cry, Melusina caught sight of him, and her bath immediately sank into the solid rock, carrying her with it. Melusina surfaces briefly every seven years as a beautiful woman or as a serpent, holding a small golden key in her mouth. Whoever takes the key from her will set her free and may claim her as his bride." [3]

Martin Luther knew and believed in the story of another version of Melusine, die Melusina zu Lucelberg (Lucelberg in Silesia), whom he referred to several times as a succubus (Works, Erlangen edition, volume 60, pp 37–42). Johann Wolfgang von Goethe wrote the tale of Die Neue Melusine in 1807 and published it as part of Wilhelm Meisters Wanderjahre. The playwright Franz Grillparzer brought Goethe's tale to the stage and Felix Mendelssohn provided a concert overture "The Fair Melusina," his Opus 32.

Melusine is one of the pre-Christian water-faeries who were sometimes responsible for changelings. The "Lady of the Lake", who spirited away the infant Lancelot and raised the child, was such a water nymph.

"Melusina" would seem to be an uneasy name for a girl-child in these areas of Europe, but Ehrengard Melusine von der Schulenburg, Duchess of Kendal and Munster, mistress of George I of Great Britain, was christened Melusine in 1667.

The chronicler Giraud le Cambrien reported that Richard I of England was fond of telling a tale according to which he was a descendant of a countess of Anjou who was in fact the fairy Melusine, concluding that his whole family "came from the devil and would return to the devil".[4]

References in the Arts

Marcel Proust's main character compares Gilberte to a Melusine in Within a Budding Grove. She is also compared on several occasions to the Duchesse de Guermantes who was (according to the Duc de Guermantes) directly descended from the Lusignan dynasty. In the Guermantes Way for example, the narrator observes that the Lusignan family "was fated to become extinct on the day when the fairy Melusine should disappear." (Volume II, Page 5, Vintage Edition.)

Melusine is a recurring metaphor in André Breton's Arcanum 17 and Nadja.

The Melusine legend plays a prominent role in A. S. Byatt's Possession. One of the main characters, Christabel LaMotte, writes an epic poem about Melusina.

The female figure in the Starbucks logo has been likened to a Melusine.[5]

In Czech the word meluzína refers to wailing wind, usually in the chimney. This is a reference to the wailing Melusine looking for her children.[6]