Lilith, also known as the Succubi Queen Lilith, is a Succubus character in the Marked online text based role playing game, created by Laura on the Marked website.

Lilith’s prime shift isn’t far from her appearance as a demonic Queen, the shift simply entitles Lilith to disguise her signature Succubi features.

Her hair is a gorgeous shade of orange, hanging loosely around the edge of her collar bone but graduating down in length around to her spine. It shines against her pale complexion which to this day exists without a blemish in sight. Her eyes remain the same shade, regardless of the glamor used to fool humans, which is a beautiful shade of blue… the kind of eyes which appear to be looking right into your soul. This ironically, is what she is doing. Her lips are deep in color, but are usually masked behind various shapes of expensive lip shades.

Lilith maintains a US size 4-6 natural figure, and at a modest 5ft8” her legs are something to awe over. Well, something which she demands more like. She’ll drape her body with the world’s most expensive jewellery and garments, and will always been seen with her make-up fixed to perfection.

All that was aforementioned is applicable here, but with a few extra and rather noticeable features. First of all, her wings, which are mixes of black and purple shades upon vast reptilian appendage. The wings stretch out to be 4 meters in length either way, with the last meter being a pure bone spike. Her nails and teeth are all sharpened to a point, with her two meter long tail taking on a similarly demonic appearance. Succubi use their teeth identically to how Vampire’s use theirs, but what they extract is totally different.

As one of the four demonic Queens, as well as a Succubi of shadow affinity, Lilith is as sadistically perfect as they come. Acting subservient to the male population is considered a sin in Lilith’s eyes, as is faithfulness and trust. Her very existence lies within promiscuous behavior, and for using human and superhuman males for one thing… and one thing only. Therefore it is a known trait of Succubi to be persuasive and seductive in all manners of speech, the highest levels of etiquette is only second nature to these beasts born from human lust.

Chaotic and destructive tendencies are masked behind calm, collective, and sultry manners, knowing what and how to say something to achieve the maximum result. Her nature isn’t to kill humans, but it is to interact with them sexually,... toying with their desires, and use their life energy as repayment. As a Queen she will never take no for an answer. In mythology and folklore Lilith is known as the demon of seduction, and with such a strong label she aims not to disappoint those who view her as a bible myth, and not the real being that she so clearly is.

Lilith lives in a world of self-absorption, adorning herself in the finest materials. After thousands of years money is nothing to worry about, and this is reflective in her extravagant lifestyle which she’ll always gladly flaunt for attention. A personification of human sin Lilith feeds on human weakness, and is drawn to those whose emotions are wearing thin, subsequently taking prime advantage and taking what they quite obviously fail to sustain. Life.

To top this is Lilith's ability to maintain such a high level of sophistication and elegance, something which only makes her power of seduction all the more mystifying.

If you were to read your average folklore book, or an article of mythology, you would understand that ‘Lilith’ was the first woman. A woman offered to Adam. A woman that, when she refused his advances alongside him refusing her wish for equality, fled the Garden of Eden for a life plagued by darkness. It is also speculated that her subsequent promiscuous behavior with the male population spawned demonic girls known as Lilim, which as time has shown… has proven to be somewhat less of a myth. Lilith finds amusement that her reputation follows her strongly, having read religious texts from various countries depicting her mystical existence. The archangel Samuel was said to be her lover, the moon was also said to increase her strength, and parents went to go as well as allowing their children to sleep with amulets… in means of stopping her apparent blood thirst for young souls. 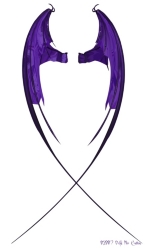 The wings tattoo that Lilith bears in her human form

How Lilith came into existence could not have been any further from what is believed. Lilith, Agrat Bat Mahlat, Naamah, and Eisheth Zenunim, the immortal Queens and original beings of the Succubi race, came to be so after the Daemos initially attacked earth. The four aforementioned were born from a human who had mated with a shadow and dream manipulating Daemos, both of whom never expected to birth what the world came to know as the Succubi half-breed race. Lilith, Agrat Bat Mahlat, Naamah, and Eisheth Zenunim were sisters born as demons, sisters born from the lust of the human mind,... sisters born from from the dark and twisted nature of the Daemos race. The demonic angels of prostitution enjoyed the myths which developed from their actions from the word go, and as sisters of a deeply seductive Daemos they vowed to maintain the level of fear and uncertainty which the humans quite obviously had.

The chaos that the Daemos has created influenced their power, allowing them to instantly take advantage of the life forces on earth influenced by the turmoil. The four Queens decided to make their presence known before furthering their race, deciding divide the earth into four quarters and respectively take up a position as ruler from there. It soon became clear that other succubi had also come into existence, but their affinity seemed to lie more in the direction of fire manipulation… unlike the ability to manipulate shadows like the four Queens. The other succubi appeared a good thousand years after Lilith and the others came into existence, which hinted to the demonic women that they weren’t alone in creating their own kind. This however over time ceased to be the case

It wasn’t long before the four Queens each established individual monarchies, with hierarchies to which they argued rivaled that seen within the Vampire half-breeds. Subsequently their presence on Earth became stories of myths and legends, something which the Queens agreed with highly in some respects. Lilith became known as the demon of seduction and desire, Agrat Bat Mahlat the demon of sacred prostitution, Naamah the demon of divination through her apparent connection to life as a fallen angel, and Eisheth Zenunim… a demon feared for her power…after being named the first Succubi.

After 5000 years Lilith has produced many Lilim, which compared to amount of Succubi known for their abilities with fire seemed vast, but the rarity of her children’s abilities granted more respect. Due to reasons unknown Naamah and Agrat Bat Mahlat lost the ability to birth succubi of shadow affinity, leaving Lilith and Eisheth Zenunim to continue to 'royal' bloodline. From then on Naamah and Agrat Bat Mahlat still continue to birth new Succubi, but they were always fire affinity. This created a drift between the Queens, with Lilith and Eisheth Zenunim creating not quite an alliance... but a mutual understanding between one another, that they were still capable of continuing a pure bloodline, subsequently making themselves appear superior towards the remaining Queens.

In terms applicable to modern day humans; those of fire affinity were working class, and those of shadow affinity were the elite, the rich and powerful of a mythical world.

It was in the year 2009 that Lilith found herself purchasing a new home in Whitley MA, interested by the influx of lust and desire seeping from within its roots. To Lilith those of anything but human nature exert desires which act like a drug to Succubi, so the number of Marked and Half-breeds and Whitley came to be Lilith’s reason to moving close. Of course she is unaware of factors such as Rochester Academy’s true existence for example, as searching out the local schools was the last thing truthfully on her mind, but something here is just making it difficult for her to stay away!

As Lilith is one of the four original Succubi, she, like her fellow demonic queens, is blessed with the rarer of two known Succubi powers. This ability is known throughout the subsequent Succubi as ‘Shadow’, only decedents of the four queens carry the ability to manipulate the shadow based abilities, making any who show such promise a worthy associate to have. For Lilith in particular she is able to create and manipulate darkness, using the shadows to create terrifying images which pry on the weak imaginations of humans. The shadows allow her to pass through solid objects quickly, re-appearing where she chooses. Lilith was born from darkness, and thus the very shadows bring forth the strength and wisdom which her reputation openly stands for. That feeling when you turn around, thinking as if someone is following, or even staring,… chances are that there is. Chances are, it’s Lilith.

Lilith is able to coax men and woman into deep slumber, and manipulate the dreams within. As Lilith is one of the originals she is able to easily manipulate either gender, unlike the incubus and succubus of today whose talents lie in luring the opposite gender into false hope. Entering the dreams of another is an easy feat for Succubi, all it takes is a little imagination and… viola… in. The dreams can be as vivid as a Succubi desires, whether this is to force pleasure or destruction into a humans mind as her or she sleeps, or reveal their deepest secrets and desires in a way in which they are shown for what they really are.

Another racial attribute for the Succubi is shift between human forms, making the art of seduction all the more exciting. The first human shape shift will always be the Succubus’ true shift, the form to which they’ll most commonly use to blend in with society. The change allows the Succubi to disguise the sharp nails, teeth, and tail, with their wings simply appearing as tattoos across their backs. When not taking on a fully human appearance Lilith’s wings are about 4 meters in length, showing her age and authority. As what may already be obvious Succubi are keen flyers, and as such very stable and acrobatic in the air.

Vampire’s are dependent on the blood of humans but Succubi are more interested in their souls, the very life force which keeps humans alive. The energy, stamina, and consciousness of a human are the delicacies of Succubi diet. Due to her age Lilith, and the other 3 Queens, can go for weeks and still maintain her level of strength, but Succubi can generally last up to a week before they themselves become very weak. The life force helps them heal faster from injury, but fatality is never something the half-breeds need worry about, as they are immortal. However they are still weak in regards to human illness, except for sexually transmitted ones, which giving their behavior is probably the one they’d come across most.