For the Dungeons and Dragons role-playing game character, see Lamia (D and D).

In ancient Greek mythology, Lamia (/ˈleɪmiə/; Greek: Λάμια) was a beautiful queen of Libya who became a child-eating daemon. Aristophanes claimed her name derived from the Greek word for gullet (λαιμός; laimos), referring to her habit of devouring children.[1]

In the myth, Lamia is a mistress of the god Zeus, causing Zeus' jealous wife, Hera, to kill all of Lamia's children (except for Scylla, who is herself cursed) and transform her into a monster that hunts and devours the children of others. Another version has Hera merely stealing away all of Lamia's children and it being Lamia herself, losing her mind from grief and despair, who starts stealing and devouring others' children out of envy, the repeated monstrosity of which transforms her into a monster on its own.

Some accounts say she has a serpent's tail below the waist.[2] This popular description of her is largely due to Lamia, a poem by John Keats composed in 1819.[3] Antoninus Liberalis uses Lamia as an alternate name for the serpentine drakaina Sybaris; however, Diodorus Siculus describes her as having nothing more than a distorted face.[4]

Later traditions referred to many lamiae; these were folkloric monsters similar to vampires and succubi that seduced young men and then fed on their blood.[5]

In later stories, Lamia was cursed with the inability to close her eyes so that she would always obsess over the image of her dead children. Some accounts (see Horace, below) say Hera forced Lamia to devour her own children. Myths variously describe Lamia's monstrous (occasionally serpentine) appearance as a result of either Hera's wrath, the pain of grief, the madness that drove her to murder, or—in some rare versions—a natural result of being Hecate's daughter.[6]

Horace, in Ars Poetica (l.340), imagines the impossibility of retrieving the living children she has eaten:

Shall Lamia in our sight her sons devour,

and give them back alive the self-same hour?

Stesichorus identifies Lamia as a daughter of Poseidon and as the mother of Scylla by Phorcys.[8] This might be a conflation of Lamia with the sea goddess Ceto, traditionally Phorcys's wife and mother of Scylla. Further passing references to Lamia were made by Strabo (i.II.8) and Aristotle (Ethics vii.5). Other sources cite Triton as having fathered Scylla by Lamia. Antoninus Liberalis identifies the dragon Sybaris with Lamia, another conflation.

Mothers throughout Europe used to threaten their children with the story of Lamia.[9] Leinweber states, "She became a kind of fairy-tale figure, used by mothers and nannies to induce good behavior among children."[10]

Many lurid details were conjured up by later writers, assembled in the Suda, expanded upon in Renaissance poetry and collected in Bulfinch and in Brewer's Dictionary of Phrase and Fable: Lamia was envious of other mothers and ate their children. She was usually female, but Aristophanes suggests a hermaphroditic phallus.[11] Leinweber notes, "By the time of Apuleius, not only were Lamia characteristics liberally mixed into popular notions of sorcery, but at some level the very names were interchangeable."[12] Nicolas K. Kiessling compared the lamia with the medieval succubus and Grendel's mother in Beowulf.[13]

Apuleius, in The Golden Ass, describes the witch Meroe and her sister as lamiae:[14] "The three major enchantresses of the novel—Meroe, Panthia and Pamphylia—also reveal many vampiric qualities generally associated with Lamiae," David Walter Leinweber has noticed.[15] 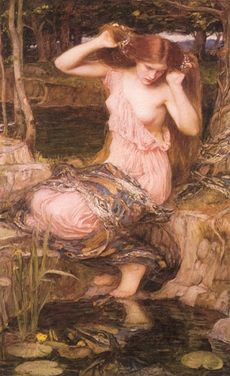 Lamia (second version) by John William Waterhouse (1909); note the snakeskin on her lap.

One interpretation posits the Lamia may have been a seductress, as in Philostratus' Life of Apollonius of Tyana, where the philosopher Apollonius reveals to the young bridegroom, Menippus, his hastily-married wife is really a lamia, planning to devour him.[16] Some harlots were named "Lamia".[17] The connection between Demetrius Poliorcetes and the courtesan Lamia was notorious.[18][19][20] In the painting by Herbert James Draper (1909, illustration above), the Lamia who moodily watches the serpent on her forearm appears to represent a hetaera. Although the lower body of Draper's Lamia is human, he alludes to her serpentine history by draping a shed snake skin about her waist. In Renaissance emblems, Lamia has the body of a serpent and the breasts and head of a woman, like the image of hypocrisy.

Christian writers warned against the seductive potential of lamiae. In his 9th-century treatise on divorce, Hincmar, archbishop of Reims, listed lamiae among the supernatural dangers that threatened marriages, and identified them with geniciales feminae,[21] female reproductive spirits.[22]

John Keats described the Lamia in Lamia and Other Poems, presenting a description of the various colors of Lamia that was based on Burton's in The Anatomy of Melancholy.[23] The Keats story follows the general plotline of Philostratus, with Apollonius revealing Lamia's true nature before her wedding.

In the modern Greek folk tradition, the Lamia has survived and retained many of her traditional attributes.[24] John Cuthbert Lawson remarks "....the chief characteristics of the Lamiae, apart from their thirst for blood, are their uncleanliness, their gluttony, and their stupidity".[25] The contemporary Greek proverb, "της Λάμιας τα σαρώματα" ("the Lamia's sweeping"), epitomises slovenliness; and the common expression, "τό παιδί τό 'πνιξε η Λάμια" ("the child has been strangled by the Lamia"), explains the sudden death of young children.[25]

The English poet John Keats published his narrative poem "Lamia" in 1820.[26] The poem has influenced later works of Western literature. Elizabeth Barrett Browning's epic poem "Aurora Leigh" contains numerous references to Lamia, including Book One in which at times a portrait of her dead mother appears as a Lamia, and Book Six in which she repeatedly refers to Lady Waldemar as Lamia. Booker Prize winner A.S. Byatt's 1998 collection of short fiction, Elementals: Stories of Fire and Ice contains a short story entitled "A Lamia in the Cévennes", which references Keats poem.[27] The character Brawne Lamia appears in Dan Simmons' novels [Hyperion and The Fall of Hyperion. The works of John Keats feature heavily in the novels.[28][29] In Neil Gaiman's novel Neverwhere, Lamia is a "velvet," a type of warmth-drinking vampire.

Keats's poem also influenced British progressive-rock band Genesis and their track "The Lamia" from the 1974 double concept album The Lamb Lies Down on Broadway. The lyrics to the track, written by then lead vocalist Peter Gabriel, describe three snakelike creatures with female faces, roughly corresponding to Diodorus's description.

The Lamia has appeared as a monster in the Dungeons & Dragons fantasy role playing game, introduced to D&D in the first edition of Advanced Dungeons & Dragons (1977), with an illustration by David C. Sutherland III,[30] after the edition moved away from a theme of 1960s and 1970s "sword and sorcery" fantasy fiction to a mixture of medieval history and mythology.[31] Lamia have also appeared in other roleplaying games inspired by Dungeons & Dragons, such as Pathfinder.[32]

Lamia has also appeared in Rick Riordan's book The Demigod Diaries (as part of The Heroes of Olympus). Lamia was disguised as an event choreographer for Dr. Claymore, a famous author. When Claymore discovers a child of Hecate that Lamia targeted, she destroys Claymore's laptop that contained his writing works. She also destroys his favorite coffeeshop and the owner, Burly Black. Claymore escapes and warns the child about Lamia's coming. But Lamia tracks them down and eventually holds Claymore at her mercy, right after the duo find a way to banish Lamia and bind her to the earth. Claymore dies and arrives at the Temple of Hecate, where Hecate herself explains everything. Claymore then returns to the child and with Lamia being banished, walks away.

In the song "Prodigal Son" from the 1981 Iron Maiden album Killers, the singer directly asks Lamia for help since the devil has got hold of his soul.[33]

The character also makes an appearance in the BBC show Merlin, where she is the primary antagonist of season 4, episode 8, "Lamia". Here she is portrayed as a beautiful girl with serpent's blood who causes discord and violence among the men around her.

Lamias have also appeared in Japanese manga, most notably in Rosario + Vampire (where the mathematics teacher Ririko Kagome is a lamia) and in Monster Musume (where the main character Miia is a lamia). Neither character is portrayed as evil or dangerous.

Lamia appears in the popular comic series Fables as the wife of Beast (from Beauty in the Beast). Lamia believes she is the character known as Beauty, however she is actually Lamia taking Beautiy's form. Lamia had taken Beauty's form before the events of "Beauty and the Beast" and had forgotten her true nature by that point. Since then Beauty/Lamia periodically remembers her identity and reverts to her nature as a killer until Beast can subdue her.

Lamia has also appeared in the Last Apprentice book series as the protagonist's mother. The world is also populated with Lamia's children, whom were created after the curse was upon her and so appear in the form of Lamia witches.

In Whitley Strieber's novel The Hunger, the mother of the main female vampire (Miriam) is described as Lamia, who gave birth to Miriam in the pre-Christian era.[34]

In 2012, a benevolent lamia appears as a key character in the Jacqueline Carey] novel Dark Currents.[35]

It appears in the movie Drag Me to Hell as a powerful demon that is summoned after Ganush curses Christine. Its task is to torment Christine for three days before literally dragging her into Hell to burn for eternity.