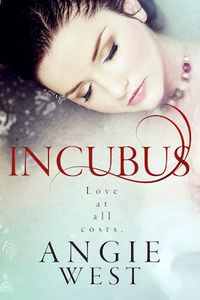 Incubus is an eBook written by Angie West. In this work the character Cairn is an Incubus.

Is he her soul mate? Or just after her soul? Savannah met a young boy as a child. Then her friend disappeared only to reappear the night before she graduated high school in a dream. Can she find love and a happily ever after with a sex demon?

The following review was originally published by Tera on her Blog, A Succubi's Tale on October 14, 2014

Savannah has had a long hard life, but the memories of a boy’s kindness and a moment of passion in a dream continue to haunt her. The dream was but once, and then five years later the man in that dream appears… And then the questions begin.

Savannah herself in an interesting person. Her life, from foster child taken in by a couple with less than honourable thoughts, to her leaving that situation, finding a new life, and making more of herself than she was expected to be I thought told a captivating story. It isn’t just that she gains a better life, its that she still remains true to her own self regardless of the forces that tug on her constantly.

Cairn, the Incubus of the work, represents a kind of Incubus that isn’t as the legends tell him to be and that, again, I found very interesting. He has no horns or tail, but simply is who is appears to be. He does have a secret which when it is revealed at the end of the work, neatly ties all of the mysteries around Savannah. The reasons for his actions, what he was willing to do for her, and what it cost him over time were means to focus his personality and character, bringing them to the fore.

There is an air of mystery, a few little red herrings that make one wonder if Cairn is telling the truth at times, it the lovely exterior is hiding something beneath it which I felt the author played very well as the work progressed.

With all of the good though comes a bit of a cliff hanger ending, one that I personally would have liked to se the resolution of. It is quite a tease, leaving questions that really do need answers, but they never came and that’s quite a shame for just how vivid a story this was.

The writing is excellent, the characters, not just Savannah and Cairn, but the supporting ones, are fleshed out very well and as the surprises mount, the reasons for them being in the story matters and that made a difference as well.

The work ends both on a promise and a cliff hanger in a way. Savannah asks of Cairn something and he agrees… But the story ends. I really wish it didn’t because that promise would have, I think, taken things to a very interesting place for both of them.

I’ll give this work four out of five pitchforks.

A story of promise, compassion and the forces that pull against them. Dreams hoever cannot be denied and in that comes redemption.

The sad thing is that this story did not continue into a series, which in all honesty it should have. The hints of Cairn’s world would have been a good starting place and with that not happening… It’s a shame.