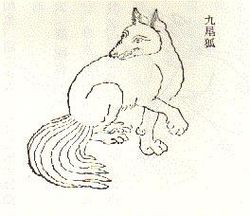 Nine-tailed fox, from the Qing edition of the Shan Hai Jing

In Chinese mythology, it is believed that all things are capable of acquiring human forms, magical powers, and immortality, provided that they receive sufficient energy, in such forms as human breath or essence from the moon and the sun.

The fox spirits encountered in tales and legends are usually females and appear as young, beautiful women. One of the most infamous fox spirits in Chinese mythology was Daji (妲己), who is portrayed in the Ming shenmo novel Fengshen Yanyi. A beautiful daughter of a general, she was married forcibly to the cruel tyrant Zhou Xin (紂辛 Zhòu Xīn). A nine-tailed fox spirit who served Nüwa, whom Zhou Xin had offended, entered into and possessed her body, expelling the true Daji's soul. The spirit, as Daji, and her new husband schemed cruelly and invented many devices of torture, such as forcing righteous officials to hug red-hot metal pillars.[1] Because of such cruelties, many people, including Zhou Xin's own former generals, revolted and fought against Zhou Xin's dynasty, Shang. Finally, King Wen of Zhou, one of the vassals of Shang, founded a new dynasty named after his country. The fox spirit in Daji's body was later driven out by Jiang Ziya (姜子牙), the first Prime Minister of the Zhou Dynasty and her spirit condemned by Nüwa herself for excessive cruelty.

Typically fox spirits were seen as dangerous, but some of the stories in Pu Songling's Liaozhai Zhiyi are love stories between a fox appearing as a beautiful girl and a young human male. In the shenmo novel The Three Sui Quash the Demons' Revolt, a huli jing teaches a young girl magic, enabling her to conjure armies with her spells.[2]

Belief in fox spirits has also been implicated as an explanatory factor in the incidence of attacks of koro, a culture-bound syndrome found in southern China and Malaysia in particular.[3]

There is mention of the fox-spirit in Chinese Chán Buddhism, when Linji Yixuan compares them to voices that speak of the Dharma, stating "the immature young monks, not understanding this, believe in these fox-spirits..."(Source: The Record of Linji, Honolulu 2008, p. 218)