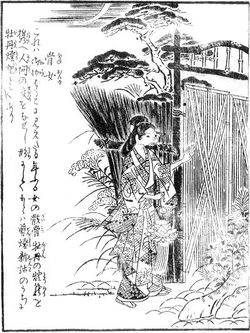 Hone-onna (骨女, 骨女?) literally: bone woman, is a being from Japanese legends. In some versions, it is thought to be a female yōkai who kills men by extracting their lifeforce or by grabbing their hands and holding them until the victim becomes a skeleton himself.[1] In others, the hone onna manifests as a skeletal woman.

The hone-onna appears for the first time in a yōkai encyclopedia called Konjaku Gazu Zoku Hyakki, written in 1779 by Toriyama Sekien. The story in which the bone woman is mentioned is named Botan Dōrō (牡丹燈籠; "The Peony Lantern"). It tells about a beautiful, but very skinny lady carrying a red lantern in shape of a peony flower and visiting men in attempt to sleep with them. Botan Dōrō itself is derived from a Buddhist Chinese tale collection named Otogibōko (御伽ばうこ), written by Asai Ryōi in 1666. The collection was composed as some kind of moral-free version of the Chinese work Jiandeng Xinhua written in 1378 by Qu You.[2]

Botan Dōrō tells about a young man named Ogiwara Shinnojō, who is wandering around at night and who meets a young woman named O-Tsuyu. She carries a red peony lantern and Shinnojō immediately falls in love with her. Every evening now they meet each other for love and to sleep together. The overly curious neighbour sneaks secretly to the bedroom of the couple to observe them. When the light of the bedroom falls onto the couple the neighbour nearly dies in shock, when he recognizes that the sleeping Shinnojō shares his bed with a moving skeleton.[3]

An orally traditioned legend from Akita prefecture tells the story of a young man who became lost during a heavy snow storm. Suddenly he saw a young woman, carrying a red peony lantern. The woman waved at him and guided the man to her house. When the man wanted to thank her for help, the light of the house and the lantern fell onto her face and the shocked man recognized her face as a blank skeleton skull.[4]