Hell In a Handbasket: Welcome to Hell - Volume 1 (eBook) 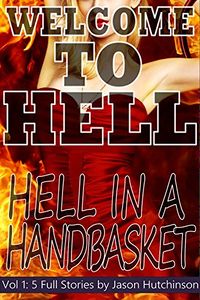 Hell In a Handbasket: Welcome to Hell - Volume 1 is an eBook written by Jason Hutchinson. It a collection of the first five works in the Welcome to Hell series by this author. In this work the character Lisa is a Succubus.

There are rules, though. Apparently, that's bad news.

Chuck's mentor in Hell, Lucky, really isn't that good at his job and failed to mention to him that there was a big taboo about being intimate with the denizens of Heaven, succubi, and even the angels. That's not going to stop the two of them from having a great time in the afterlife, though!

As he learns to navigate the pitfalls and the rewards, he continues to realize that the women of Hell want all the hard, fast, unprotected sex he can muster, their fertile bodies craving anything their man could ever possibly want!

Will he and Lucky, along with the Hellishly prolific Siggy Freud, author of Making the Most of Hell: 20 After-life Hacks get in even more trouble as they join the Make Hell Great Again resistance?

And lastly, what will happen when Chuck comes face to face with the off-limits but incredibly hot angel, Candy?

Find out in this thrilling, novel-length collection; and...Welcome to Hell!

The following review was originally published by Tera on her Blog, A Succubi's Tale on January 27, 2017

Chuck’s biggest problem isn’t that he’s dead, nor is it that he’s in Hell either. No, his biggest problem is that he hasn’t a clue what the rules are and that’s getting him into a lot of problems. That would be a problem, considering he’s been intimate with angels, succubi and the occasional soul from Heaven that wants something from him. But then the sex is amazing, even if the narrator can’t seem to be able to give Chuck a break… or a rimshot.

The series is a wonderfully smart story which doesn’t take itself too seriously, breaking quite a number of writing rules in order to bring out the humour that abounds here. There is plot, quite a bit of character development as well, which just added to how much I liked things overall. There’s a real feel of the characters “winking” to the reader, the insanity of some moments being wrapped around snide comments, puns and, of course, as much sexual innuendo as possible.

There are quite a number of characters in the stories, they coming and going, in various ways, which means that there are a lot of side trips and encounters that fall away from the main plot and create some interesting side stories to follow. One of these brings Lisa, the succubus of the series into play.

Lisa is a rather unique succubus, her character was a refreshing change and I liked her occasional bit of snark from time to time. While she isn’t really a major character, she does provide some odd moments for Chuck to get through, not to mention her interesting way of looking at things as well. I’d have liked to know more about her, the little teases about her made me wonder about a few things as well. Further to that, when Candy the angel appeared I really wanted them to get together, one way or the other, but sadly that didn’t happen.

The writing is, to say the least, rather unique. The humour is in every page, the smirk that must have come to the author from some of the sillier moments, not to mention the sheer number of puns along the way, is really felt.

The erotica is a series of hot flashes intermixed with the overall story and they work quite well, not bring out of place or just there for the sake of Chuck having yet another bit of fun along the way. Some of the erotica was very hot, some of it didn’t quite sing as well as it could have. I think a lot of that comes from the rush, at a few points, of the story leaping from event to event, not really allowing for a lot of exploration of what’s going on around Chuck.

But the humour makes up for much of that, it is a delight to read. Chuck seems to be having the most interesting afterlife, hopefully it won’t bite him in the rear too soon. But with friends in Hell, sometimes good intentions can make anything happen. I think he’s learning that to our amusement.

I’d have liked to see more of Lisa, though really there’s so much going on otherwise that it would have taken a lot away from all else in the series. It’s a fun work, it made me smile throughout, and overall I enjoyed it so very much. There are some things I wish had happened, the one most of all would be Lisa and a certain character named Candy meeting each other. But then, that for my own personal bemusement of course.

The author notes that this series will be continuing in the near future, and I’m looking forward to that appearing. There’s a lot of dangling plots that need to be closed, a lot of jokes still to come I’m sure along with Chuck and a lot of others I’m sure. Hopefully what’s made the series so far will continue and my delight will as well.