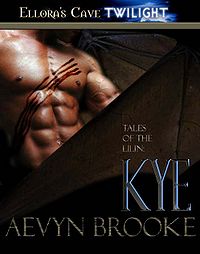 Dream Seductions: Kye is a novel written by Celeste Hall which first appeared under the author's pseudonym Aevyn Brooke through Ellora's Cave Publishing. It is the second work in the Dream Seductions / Blood Seductions series by this author. In this work both succubi and incubi appear and the main male character Kye, is an incubus. According to the series, in this universe incubi outnumber succubi nine to one. The race as a whole are known as Lilin and are born of Lilith and sired by an angel.

When a savage attack destroys all but two of the queen’s defending males, Kye finds himself slowly starving to death. After an unexpected ambush leaves him dying he turns to the human woman that saved him for more than just a temporary sanctuary, and it will change him in ways that he would never have expected.

The following review was first published on Tera's Blog, A Succubi's Tale on January 20th, 2012

It’s quite the comparison between the first book, considering the two characters the story revolves around. Kye, an incubus, a proud one that cares about his purpose first, protecting his Queen Ayleth, one of the few remaining Succubi that exist in this world. The other is the woman that saves him from a vampire attack, Jamie, a nurse with a past that haunts her every day.

While the first book was of love between the main characters in the story, Ethan and Madison, this story is more about trust. About needed to trust in someone that they won’t betray you like you have been before. That you will accept them in spite of the fears that reside within you. Now, that’s not to say there isn’t love in the story, there most certainly is, but the thing is that to find that love, that acceptance between Kye and Jamie isn’t an easy thing for them to do.

And that makes the story very interesting…

Besides this point of the tale, I was quite happy to see that a good deal of the universe that the Succubi and Incubi exist in was made more clear and defined better for the reader. It’s not done as an info dump, but rather in small little thoughts and considerations that each of the characters have as the story goes on.

As in all good stories, there is a threat to face, and as in the first book it is the existence of vampires in this world and their threat to not just the Succubi and Incubi, but humanity overall that begins to take center stage. I thought that the transformations that occurred in the story showed more than anything else, the sharp contrasts between the “good,” being the Succubi, Incubi and humans, and the “bad,” being the vampires.

There is a good deal of violence in this story mixed in with moments of joy as their story goes on. There is, of course, some very hot scenes between Kye and Jamie, some light bondage for those that enjoy it, but also some, what I think, are truly touching moments of trust that come to pass. It makes them both very real and you care about them in the moments when danger strikes and you don’t know if things will turn out alright.

And they don’t always do for Kye, his brood, or the humans that have placed their trust in them.

The story builds quite well from tension to tension towards not a resolution, but a pause before the next book in the series continues the story and leads the reader on.

The author writes well, there was nothing to draw me from the story, and I appreciate that they have spent a good deal of time making rules and a history of all of their creatures, great and small. It’s always a good thing to manage your characters in a way that you can make them grow over time and yet still be true to their origins.

Four and a half pitchforks out of five.

Perhaps a bit more violent than I personally like, but the story makes the universe much, much more interesting and involved. That’s important for a sequel story and I think the author did really well.