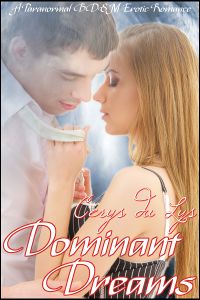 Dominant Dreams is an eBook written by Cerys du Lys. In this work the main character Gideon is an Incubus.

Nina dreams of a life where she can study, be intelligent, and do something with her life. Her husband, Edwin, is too busy with his business and too old-fashioned in his ways to allow her any freedoms outside of their quiet country manse, though.

At least, that is, until one night Nina's dream takes on a life of its own. Gideon, an incubus, enters her dream and accepts her inquisitive nature. When she plays a game with the demon, one which results in a mind-blowing climax, she wants more.

But Gideon's next game is more than she bargained for. He demands complete and utter obedience from her, or there will be consequences. Not one to back down, and wanting to become a person of legend for besting a demon, Nina accepts.

When she disappoints him with her mouth, and he tosses her over a rock to gain his pleasure in another way, Nina is conflicted. Gideon is rough, but so much more real to her than Edwin could ever be.

Except this is a dream, isn't it?

The following review was originally published by Tera on her Blog, A Succubi's Tale on March 17th, 2013

The comparison between the world that Nina lives everyday with her husband and that of Gideon I think is best described as blandness compared to a banquet of sights, sounds and more. There is a very clear delineation between a world were Nina cannot see love or passion or find a way to make her life mean something more versus that which Gideon presents to her. It is a dream, but then some dreams are, truly, more real than reality is aren’t they? In a way, that is the core of this story. A comparison between that which one has and that which one desires. And occasionally that desire is offered by an Incubus who desires something in return.

Gideon is, if not the stereotypical Incubus, then at least has some of the appearance of one. But not in an over the top way which adds a certain amount of mystery to him. Is this his true form or simply a show for Nina? On this point we are never quite sure save to say that he does have horns and not ones that are silly or over the top which I appreciated. Past that point, he is the image of sexuality, he is an Incubus of course, I would not expect less from him, and he does deliver on that point throughout the story.

Nina is not quite the innocent in this story. She is frustrated and in need because of her marriage and that opens the door within her dreams for Gideon to make his play for her. The work feels like it is set in the times of “proper” women who doted on their husbands, were made to be at home, and not be more than they are. Nina rails against this from the beginning of the story and, in truth, looking at her life from the perspective of today it is not anything like I would call enjoyable at all.

Still, it is her situation, her life and in Gideon she finds what she feels is a release from that world. However while at first it is her dream, once she meets him, and she knows, vaguely, what he is, then the dream slips away from her and into Gideon’s control. He has a goal and that goal fits with the mythos of the Incubi quite well. But the thing that makes the change different is that Nina is simply dominated by Gideon.

Personally I have a problem with a lot of stories about domination. That problem is that reading about pain and torture wrapped within what is claimed to a a story… Isn’t. A story, when it done well has the dominance as supporting the rest of what happens within it. In this work the dominance exists, but it isn’t made to be hurtful or injurious in nature. There are moments of punishment, of testing one’s strength and finding their weakness. But the crassness, the lack of desire isn’t part of that as it is in many works that touch on this theme. It made what would have otherwise been less than interesting to me a lot more so.

Overall, the story flowed well, the characters were lovely complicated beings… well except for Nina’s husband and I feel like there was something unsaid about him that would add a level to this work if I am right in my thinking about him. The writing is descriptive where it should be, the heat in the erotica is lovely and paints the picture in your thoughts quite well. There is no doubt of who is controlling whom when those moments occur and the decent into submission is a vert carefully crafted art that had the right amount of heat to sustain the story as a whole.

I’m giving this work four out of five pitchforks.

Lovely writing, the characters, even those that have no soul within them, are well fleshed out and feel very real. Lovely heat at the right moments and a story that takes the mythos of the Incubi and takes it to a place that isn’t done well. This time it was.