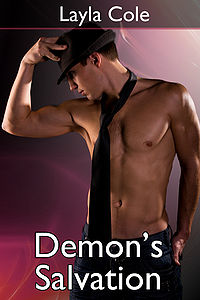 Demon's Salvation is an eBook written by Layla Cole. It is billed as the first work in the Incubus Chronicles series by this author. In this work, the character Eli is an Incubus.

After spending more than 80 years as a witch's slave, sex demon Eli has some serious scars. When he meets Shannon, a waitress with a broken heart, he sees the chance to get back in the game. Will one wild night be enough to help him heal?

The following review was originally published on Tera's Blog, A Succubi's Tale on August 31, 2014

Rather than reviewing each of these works, I am going to give my impressions of the series as a whole. Overall the most interesting thing to me was Eli himself. While he is a “sex demon” which I read as him being an Incubus, he isn’t what you might expect him to be. By that I mean he has a good deal of hurt and pain within him that someone else caused and in that came a change within him. Yes he needs sex to survive and yes he can be one minded in that sometimes. But the thing is that unlike a lot of similar characters he cares about the other as much, if not more than himself.

Watching him having to deal with being 80 years out of touch with the world around him is both funny and tragic at the same moment. I thought the quirks he had of wearing a fedora was perfect for his personality and the little touches the author made in his looks, actions, and voice made him a much more rounded character and really more of a person in my own thoughts.

Eli’s history, of which some is told and a lot of it isn’t a good reflection on humanity as a whole, really is heartbreaking. There is always that hint of being on the edge of despair on the one hand and holding onto the moments where he is given a reason for making it to the next day. While some of that is his own need to find a measure of revenge on the one that hurt him the most, there is another side of him that sees the possibility of finding something he needs. Love.

That search which is invested in the rest of his life and travels takes him to places and people that gain from his being there, but in return he gains a strength that makes him, bit by bit, better. The series is a rite of passage for Eli I think and it is that passage that held me most of all.

The only thing that I wish was that the stories themselves were longer than they are. The stories are a little bit more than hot flashes which I like, but the thing is with all of the backstory that each character has I would have liked to explore that more than it was.

As a whole I give the series three and a half out of five pitchforks.

Well written, some lovely heat and passion within the stories. Just very short and with all that is background in them that’s the real shame here.

There is a lot still to be told about Eli I think and I’d like to see that sometime. The author hasn’t returned to this series for sometime obviously and that’s a shame as Eli as written as a person, not so much a character and his history is something that I would have liked to explore more.