Def by Temptation is a 1990 horror movie involving a succubus who preys on men. It was directed by James Bond III and stars Kadeem Hardison, Samuel L. Jackson, and Bill Nunn. It was released in March of 1990. The director James Bond III played the character Doc in the children's television series The Red Hand Gang. 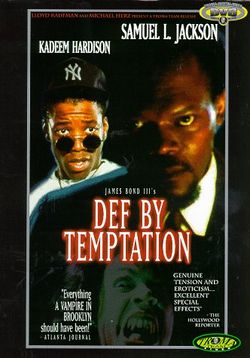 Joel [James Bond III] is almost to the end of ministry school when he feels the need for a break before taking on the final plunge, so he calls his brother "K" [Kadeem Hardison], an aspiring actor in New York City, and asks "K" whether he can come stay with him for a little while. "K" is only too happy to show his little bro around the wild city. First stop is the One Step Down club that "K" visited the night before. It was here that he met the girl of his dreams [Cynthia Bond], and he is hoping to run into her again. What "K" doesn't know is that she is a demon succubus who picks up men in the bar, takes them home to her apartment, has wild sex with them, and then kills them.

Before "K" can hook up with the girl again, she has already laid her latches on Joel and pretends not to recognize "K". At first, "K" thinks she's playing a joke on him, but it soon becomes apparent that she's not. The next day, when she drops by the apartment to pick up Joel, "K" notices that she casts no reflection in a mirror, and he becomes concerned. He consults his detective friend Dougy [Bill Nunn] and asks for advice. Turns out that Dougy has been following her for years. He's been watching her pick up men at the bar, and the men she picks up are never heard from again. Dougy has a long list of her victims from as far back as the 1800s who all seem to have been murdered by the same modus operandi, same satanic rituals performed before killing the victims, and fingerprints that are not human. Her file name is "Temptation".

In order to gain more knowledge about Temptation, "K" and Dougy pay a visit to a psychic. Madam Sonya is able to tell them that Temptation, whom she calls "It", exists to corrupt the part of man that seeks God and good. "It" uses man's sexuality to place them in a state of lustful existence. "It" incarnates periodically for the sole purpose of seducing and destroying souls. "It" is an ancient demon, and she lured Joel to New York. As Madam Sonya [Melba Moore] is telling them how to destroy the demon, Temptation takes over Madam Sonya's body and warns "K" and Dougy that she knows about them and will not let them live.

"K" decides that it's time to take matters into his own hands. First, he tries to warn Joel about Temptation, but Joel insists that he can take care of himself. Next, he calls their Grandma [Minnie Gentry] back in North Carolina, who has been having bad dreams about Joel. Finally, "K" and Dougy head over to the club to kill Temptation. They get the bartender to fix her a drink using holy water as the mixer. As Temptation lies thrashing on the floor, Dougy tries to thrust a knife through her heart, but she makes Dougy turn the knife on himself. Fortunately, "K" is able to turn the knife away from Dougy. Knowing that they're fighting something bigger than they can handle, "K" and Dougy run from the bar, but Temptation catches up with Dougy.

"K" runs home, but Joel isn't there. "K" takes a drink from a soda bottle in the refrigerator and begins to hear voices. Grabbing a knife, he tracks down the voices to the television but, when he goes near, he is sucked into it. Joel has gone to Temptation's house, where she is busy trying to get him to drink liquor and become sexually aroused. She kisses Joel, and he immediately passes out. Joel awakens to find himself lying in his childhood bed next to Temptation, his deceased father standing over them. Joel realizes that this cannot be his father just as Grandma bursts in the door, but Temptation belts her one, then does the same to Joel. Temptation transforms into her demon-self and tries to strangle Grandma. Joel crawls to where his Bible and cross have fallen, grabs the cross, and holds it up to Temptation until she explodes. Grandma and Joel hug each other.

Epilogue: A car drives up to the One Step Down. It is chauffeured by "K". Dougy gets out of the back seat and saunters into the club, putting on the same act that Temptation used to use. Joel, walking down the street, assures himself that he and Temptation will meet again someday.

The following review is from the Amazon.com link in the External Links below:

As an avid fan of movies from the vampire genre, I wasimmediately drawn to this one based on the detailed review of AndrewWright of Amazon.com. However, to my surprise, the movie is not about vampires, but instead about the eternal struggle that men are confronted with--temptation. Bond portrays a minister "to-be" who comes from a long line of ministers. Struggling with the question as to whether there is more to life than the ministry, he visits his childhood friend, Hardison, who is a struggling "B" movie actor in New York. Little did he know that he would encounter a demon temptress named, you guessed it, Temptation, who, like the reviewer stated, is single-handedly destroying the men from a local "pick-up" joint.

What makes this movie interesting is also what makes it a little campy. The seductress plays on the main sexual deviations of men: each concluding with real, and relevant, endings to the perpetrators. The real storyline poses the question, "Can you resist Temptation in this life to do what God requires of you?" This is a question which is posed bluntly, and those who answer no, meet gruesome ends.

Overall, the storyline is good, the acting decent, and Cynthia Bond as the temptress is hot. This is overall a good movie and well worth viewing.