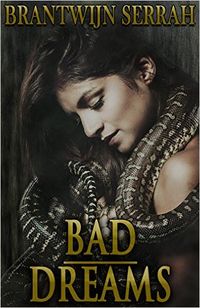 Bad Dreams is an eBook written by Brantwijn Serrah. In this work one of the characters is an Incubus and the character Priya is transformed into a Succubus.

Priya can't sleep, but that's not the worst of her troubles. She's starting to hallucinate, and every night she's seeing a very wicked male…

The doctor calls it “sleep paralysis.” Her husband doesn't realize anything's wrong. But night after night, Priya finds herself stuck between sleep and waking, perfectly aware and perfectly helpless, as a looming dark creature hovers over her. He promises pleasure so sinful, Priya can't resist. Bound in his coils, she's starting to lose herself...

The following review was originally published by Tera on her Blog, A Succubi's Tale on March 6, 2016

Priya’s sleep isn’t much of one. She exists inbetween the world of wake and sleep throughout her nights and as she does so, something strange begins to happen. The waking world becomes a dream while her dream, and the pleasures within, becomes her all.

The work tells what is quite the complex story. It begins in a matter of fact way but as Priya falls further and further into the clutches of the incubus, reality and her dreams get mixed up in some very odd and unique ways. It is jarring at some points where Priya’s feelings and changing attitudes about her “waking sleep” go from fearing it, to accepting it and then, finally, giving into the needs that are brought out in her as a result of what the incubus does to her.

The incubus, who is never named, is not exactly what one expects an incubus to be. There’s a good bit of tentacle erotica mixed in with some hot mind control and incubus erotica as well. The erotica tends to lean more on the tentacle theme as a whole however. Eventually the story turns from the telling of Priya falling to the temptations of the incubus and moves onto the incubus offering Priya a place in his world.

This is where things are somewhat unclear. Priya accepts the offer and is transformed, but what she looks like exactly isn’t quite clear. Her appearance seems to be more vampiric than succubus in my perception of what happens. There is a very abrupt shift in her mind, who she is, and when that happens it is a bit jarring. There is a connection to this event earlier in the story, when Priya’s thoughts about her husband are mentioned here and there, so it’s not absurd by any means.

The work closes quickly and leaves Priya as she begins her new life, but what that is, exactly, is unsure and unclear. It would lead nicely into another story about her, about what the other world is like and that could bookend this work well.

Well written, Priya is a very strong character and supports the story extremely well. While the erotica has heat, tentacles aren’t my thing so in those moments the heat was lessened quite a lot for me. The plot is complex and takes many turns to get to the ending, but that serves to keep things interesting, and it is.

I’ll give this work three and a half pitchforks out of five.

A unique kind of incubus mixed with erotica with some heat in it and a story that had something to say. Very well done and I found it interesting as a whole even if the incubus himself didn’t quite appeal to me as a whole. It would be interesting to see where Priya goes from here as that would be a story in itself to tell.