Andariel is a Succubus monster in the Diablo II video game. She is known as the Maiden of Anguish, and is one of the four Lesser Evils and is known as the Demon Queen in the game's mythology. She is a Demon, a SuperUnique, and an Act Boss. Andariel is the boss of Act One, and must be defeated to complete the Sisters to the Slaughter quest and open the caravan route to Act Two. She is located on Level Four of the Catacombs and is the first monster seen in the game who stands substantially taller than a player's character. In Diablo II she has been summoned from Hell by Diablo, and left to guard the Rogue Monastery, where she can prevent any heroes from following Diablo to the East. Characters must defeat Andariel to pursue Diablo across the vast desert to the town of Lut Gholein.

"Andariel was the only female Evil. She aided the Lesser Evils for many years, but eventually she lost faith in their plots. Two decades ago, she chose to help Diablo during his resurgence and seized the Citadel of the Sightless Eye. Ultimately, she perished at the hands of brave heroes." -Deckard Cain, writing on Andariel 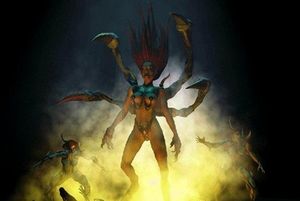 The Maiden of Anguish, Andariel.

Andariel is one of the four Lesser Evils, and the only female of the seven powers of Hell, hence her secondary title, the Demon Queen. She is considered to be the "twin" of Duriel, as their spheres of influence complement each other (Andariel tortures the mind, while Duriel tortures the body). Centuries ago, Andariel joined with the other Lesser Evils to cast out the Prime Evils as part of the Dark Exile. Nearly three hundred years later, Andariel was sent by Diablo to invade the Citadel of the Sisterhood of the Sightless Eye (also known as the Rogues) in order to close the passage through the mountains into the eastern lands of Aranoch, so that no one would be able to follow Diablo in his guise of the Dark Wanderer and prevent him from freeing his brother Baal from Tal Ras ha's Tomb. During the assault on the Rogue Monastery many sisters were slain and others were turned to serve the Maiden of Anguish, such as Bloodraven (who was also the Rouge character from Diablo 1). The surviving Rogues fled the Monastery and became scattered throughout the wilderness, although the majority of the survivors formed the Rogue Encampment, vowing to fight Andariel and reclaim their ancestral home.

Ancient Horadric texts record that Andariel and the other Lesser Evils once overthrew the three Prime Evils - Diablo, Mephisto and Baal - banishing them from Hell to our world. With this betrayal weighing against her, Andariel's presence in Sanctuary can only mean that the forces of Hell are once again aligned behind Diablo and his Brothers. While it is clear that the Maiden of Anguish is acting on behalf of Diablo to prevent anyone from following him eastward, it is also clear that she must be destroyed if the Lord of Terror is to be stopped.- Arreat Summit entry on Andariel.

Andariel was a sadistic entity, not unlike Duriel. However, while Duriel reveled in physical pain, Andariel derived pleasure from emotional anguish, believing in the "purity" of the emotion. A master manipulator, she set up scenarios in which the victim's mental state was twisted inside out. She loved seeing people torn apart by their own inner agony and emotional pain. Her general bearing is one who is in a constant state of ecstasy, experiencing unthinkable pleasures. Considered one of the most relation orientated of the Great Evils, Andariel was said to abhor isolation, as she sustained herself on the suffering of others. Despite being spawned from Hell, Andariel was not fond of fire. 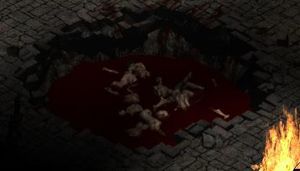 This pool can be used to escape Andariel for a while.

Andariel is found on the fourth level of the Catacombs. The first rooms are filled with undead and demon minions; its best to clear them so you can focus on Andariel. Open the gates and proceed into the throne room; if you venture far enough Andariel should approach you, saying either Die, Maggot! or Fear me!

It might be best to fight Andariel in the room with the pool of blood in the middle; you can run around the pool while Andariel chases you when you need to buy some time (for instance for healing potions to take effect). Andariel uses a potent Poison Spray ability that spreads in a large area: Mercenary units and minions that get hit will most likely die from the poison damage, given enough time. When you engage her in melee combat she can still poison you. 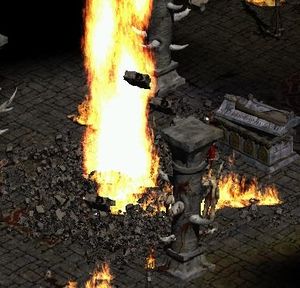 Though it's possible to limit the damage from the poison attacks by getting Poison Resistance and bringing Antidote Potions, it's probably better to just heal through the poison damage with healing potions and focus on bursting Andariel down as fast as possible. Remember: the longer the fight takes, the more damage you will take from poison attacks. Andariel hits for a decent amount of damage in melee combat as well. Just keep hitting her and she will eventually fall (if you run out of potions you can always portal back to the Rogue Encampment and get some more). Fire is Andariel's main weakness; if possible use Fire based attacks against her.

Andariel has a weakness for any fire based damage, so try to use fire-based skills and weapons as m ch as possible. Amazons can use Fire Arrow, Paladins can use Holy Fire, Sorceresses can use any fire skill she might possess, and so on. Barbarians can augment their weapons with rubies or use charms to increase their fire damage. Andariel's poison is very lethal; however, as she will poison players very often, Antidote Potions aren't usually a great help. Focus on bringing her down as quickly as possible instead.

Andariel's stats are all preset. She does not get any random Monster Modifiers.

Like the other Act Bosses, Andariel does not regenerate any hit points.

All SuperUniques (except for Uber Diablo) are found in roughly the same location every game, on all three difficulty levels. (Except for the Uber Monsters who are only found on Hell Difficulty.)

When Andariel dies, her body erupts in flame. Chunks of the ceiling fall and a Town Portal opens, bringing you back to the Rogue Encampment. Your character and mercenary do not get hurt from the falling debris, however. Now the way east is opened once more, you can continue your journey in Act II. If you return to pick up more loot, the fallen ceiling debris will have magically disappeared due to graphical errors.